An Expectation of Equality

Posted by David Goddin ⋅ March 7, 2011 ⋅ 1 Comment
Filed Under  Equality, Generations
The Institute of Leadership & Management recently published their member survey on “Ambition & Gender at Work”.  The responses of nearly 3,000 practising leaders and managers provide a meaningful reflection of gender issues in the workplace:

We all expect organisations to provide fair and equal prospects for both men & women.  However, women currently account for only 12.5% of FTSE100 board positions.  At the current rate of change it is expected that it would take over 70 years to achieve gender-balanced boardrooms in the UK.

A Question of Balance
We know that the issues around gender inequality in the workplace are complex.
The most significant of these issues revolve around work-life balance & childcare, which is a constraining factor for women, and existing male cultural environments which accommodate men more than women.
Working to counter these long standing issues are positive, enabling actions focussed on supporting women in the workplace, as well as modern expectations of equality. 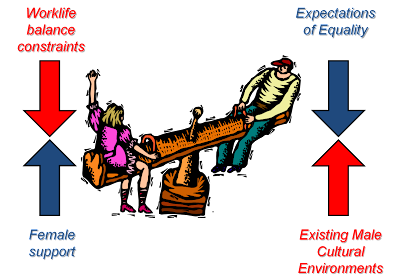 Increasing workplace opportunities and support for women through networks or tailored development activities are the right things to do.  However, they will be working against the constraints that are imposed around work-life balance, childcare and existing male cultural environments.
Addressing gender inequality is a question of taking action on all of these aspects to create greater balance.  This means taking action to reduce the effects of the constraining aspects as well as promote and nurture those actions, attitudes and behaviours which support women in the workplace.

An expectation of equality

Whilst I’ve been writing this, Lord Davies report ‘Women on Boards’ has been published.  Calling for a greater focus on gender diversity in the boardroom, it is expected that women in board positions should exceed a target of 25% by 2015.
Although this expects to double current boardroom gender diversity, it also represents an ongoing expectation of gender imbalance in the workplace.  Is this the expectation of newer generations of managers?
Actually, there is a marked differences in the ILM survey responses between the over 45s and the under 29s, the Baby Boomers (over 45s) and the children of baby boomers (Millenials).
I think this reflects a combination of optimism as well as a generational difference.  My own experience of working with younger generations of managers in particular is that there is an increasing expectation of equality that is held by both men and women alike.
This expectation of equality, especially in men, is going to be significant in creating greater balance and in particular countering existing male cultural environments.
“What gets measured gets done”
Targets & quotas can force change but rarely ever address underlying behaviours.  At best they suppress old negative behaviours during a period of transition.  Indeed, this in itself can be valuable as new behaviours are allowed to flourish.
In the worst cases, old negative behaviours perpetuate in greater secrecy with targets achieved through careful manipulation.  We can all think of failures in highly regulated industries where this has been the case.
Measuring the gender diversity of FTSE100 boards will I’m sure meet the 25% target by 2015.  Perhaps having more women on the boards will in itself reduce gender inequality further across their organisations.
Ultimately though, it will take both men and women to create an equal environment through an expectation of equality.

« Executive Coaches are Different
Being Human »