Friday Wondering – What is Coaching & Mentoring? 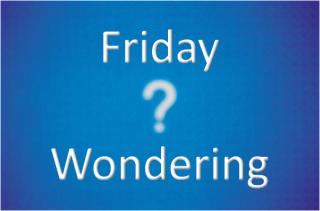 Each Friday I’m posting a “Friday Wondering“. These posts are meant to explore & discuss observations or issues which I think would benefit from discussion. Participation is open to absolutely anyone regardless of their expertise or knowledge. Just bring your curiosity!

If you’d like to discuss on Twitter rather than here then why not. It would help though if you could use the #FridayWondering hashtag. Thanks!
What is Coaching & Mentoring?
As part of International Coaching Week, I’ve accepted a challenge from @StirTheSource to deal with the question of “what is or isn’t coaching & mentoring?”. Sounds simple doesn’t it? Textbook stuff…
Actually, that’s the challenge. Hundreds of books have been written about coaching & mentoring by academics, trainers, practitioners & consultants. For all that intellectual resource there is no apparent definitive answer, not even if you look to the professional bodies.
The Definition Dilemma
So why is there no definitive answer? Let’s start with the obvious. There is no overarching professional body for either coaching or mentoring as there is with say Accountancy.
In the absence of an overarching professional body a variety of similar definitions can co-exist.
For all the historical references to Coaching (Pendennis) & Mentoring (Homer – not the Simpsons!), the question of definition seems only to have become important in recent years with the advent of coaching & mentoring in organisations or as a service. Clients want providers to explain their solutions. Authors want to assert their views. Professional bodies want to set standards and expectations.
The commercial market demands explanation but not a single definition.
I think there is also another commercial (or perhaps human) interest at play here which is the need to differentiate from other practices. Coaches, as an example, are generally quick to point out that coaching is most definitely not consulting, mediation, training, therapy, counselling or even mentoring!
There is perceived advantage to describing coaching & mentoring in a way that differentiates.
I believe that the above dynamics have contributed to a crowded and extremely varied UK market to the extent that coaching as an example has a bad reputation for some.
So with the above in mind there I have a dilemma about how do I answer the question of “what is or isn’t coaching & mentoring”? To answer provides another perspective and reinforces the above status quo which may not be seen as helpful. To not answer would seem to say that I don’t know how I practice coaching & mentoring!
What coaching & mentoring is & is not
As I’ve already mentioned, coaching is not consulting, mediation, therapy, counselling or even mentoring. The most effective way I’ve ever seen anyone describe this comes from @SandroDaSilva who wrote “A butterfly goes to a coach”. Do take a look over on his blog if you’ve not read it already.
To add to this, I do not believe coaching is just about asking questions. Some people do. For me a human interaction that connects with you requires more than just asking questions. Feedback, observation, reflection are all valuable tools that we can share with our clients to support them. It’s worth also referring to my recent post on “Advice in Coaching”.
The Confessional
Personally, I don’t believe that there needs to be a single definition of either coaching or mentoring.
I believe that coaching & mentoring have a variety of similar but differing definitions because they describe relationships based on deep levels of trust. Without such levels of trust I don’t believe coaching & mentoring can be successful. We all see such relationships through our own eyes, experiences & emotions hence the diversity of similar definitions.
I value the diversity that exists and I think clients do also – they want a variety of solutions that create long lasting sustainable change. However, we should be more definitive regarding poor practice – I think that’s a whole different blog!
I’ve said plenty!  What are your thoughts on coaching & mentoring?

« Advice in coaching
How Coaching Has Helped Me: A Coach’s Perspective »

2 thoughts on “Friday Wondering – What is Coaching & Mentoring?”